My semester abroad at La Trobe University in Melbourne was really a great experience and I would like to tell you a little bit about it!

There is a lot to organize, plan and consider in advance. I was always able to pester my contact person with questions or just drop by spontaneously to clarify important things.

In December 2015 I decided to do a semester abroad in the coming year and it was clear to me that I should definitely go to Australia. First of all, I had to choose a university, which turned out to be quite difficult. For me, it depended on several factors: the level of tuition fees, the city and was something for me most crucial on how I look at the courses here at the German university credit. It was important to me that I could credit the courses here in Germany, especially since a semester abroad is expensive enough. After I had compared all Australian universities and courses with my German courses and had the credit checked several times, I then decided on La Trobe in Melbourne. Then I started organizing everything officially and registering, taking the DAAD language test, transferring tuition fees, booking the flight and taking care of the international school. I would also really advise everyone to apply for an Auslandsbafög! I also don’t get any domestic bafög, but since the tuition fees are so high, the chances of getting a foreign student loan increase! What I also thought about for a long time was how I do it with living in Australia. Many just fly there and then look for something on site, but that was too unsure for me. That’s why I had to get a shared apartment on campus in advance taken care of. In retrospect, however, I would also do it in such a way that I would just fly over there and then look for something there. There is also the option of moving into the student dormitory on campus for 2 weeks and then looking for something in the city. That’s how I would advise you to do it! Such a semester abroad is definitely associated with a lot of organization and my to-do list was always full! On July 13th, 2016 I finally started my adventure to Melbourne!

Again, my semester abroad at La Trobe University in Melbourne was just great and couldn’t have gone much better. I can only advise everyone to come to Melbourne. The city is great and has a lot to offer. Of all the Australian cities I have seen, it is definitely the city with the most character and the best nightlife:).

In November 2013, on the recommendation of the International Office of my university, I contacted MicroEDU for the first time and reported about my plan to go to Australia for a semester abroad in February / March 2014. I thought the preparation time was a little tight and maybe it won’t work, but thanks to MicroEDU the application process was really easy and everything was just right in time. My MicroEDU student advisor was always in contact with La Trobe Univeristy, which means that everything was probably faster and less time-consuming than if I had applied independently and directly to La Trobe University.

In February 2014 I was already on the plane to Australia. The flight time passed quite quickly thanks to the good service from Emirates. After a stopover in Dubai and Kuala Lumpur, I arrived in Melbourne at night and took a taxi straight to the hostel, where I stayed for the first 3 weeks. In the hostel I met 3 others (2 Germans & 1 Mexicans) who were also in Melbourne for a semester abroad and, like me, were looking for an apartment.

After 3 weeks I moved into a nice (party) flat share in the Collingwood district. I shared a room with Kate, who also studied at La Trobe University. Each of us had to pay 200 Australian dollars (the equivalent of 140 €) per week. That’s definitely a lot, but if you want to live in a hip area close to the city center, it’s difficult to find something cheaper. In general, Australia is more expensive than Germany in all areas (a beer in a bar costs a good 7 AUD and rolling tobacco costs 25 AUD). At the many student parties that you will definitely attend, GOON is mostly consumed (cheap, Australian wine in a cardboard box:).

The International Students Team at La Trobe Univeristy held a Welcome Week, where you * got to know the other exchange students and the university. It is definitely recommended to take part, even if it is not compulsory.

The university is about an hour away from the city center by bus, which is why many choose to live on campus (which I can only advise against, since you can only get into the city at night with overpriced taxis and not really experience Melbourne).

The International Students Team at La Trobe University will help you with any questions you may have and also organize various trips, parties, open-air cinema and other events during the semester.

What impressed me most, however, was the library at La Trobe University as featured on answerresume. There you will find * brand new iMacs, TV rooms and several well-equipped reading rooms. It is also open 24 hours a day for students and the Mc Donalds, which is located next to the university and is also open 24 hours, provides a snack in between.

During my studies I received foreign student loans, the Germany scholarship and the La Trobe Ambassador Scholarship. However, due to the high prices and the many parties, I had to go to work as well. I found work at a club on Party Street – Chapel Street. As a student you can legally work 20 hours a week, but Australia is generally not as bureaucratic as Germany. . .

The courses I chose at the university were far below the standards at my German university in terms of learning effort and requirements, which is why there was a lot of time for city customers and travel:).

As an exchange student, you can choose between 3 or 4 courses. I consciously decided on 3 in order to be able to enjoy my semester abroad more stress-free, but it is definitely feasible to complete 4 courses.

The time in Melbourne passed incredibly quickly and my departure from this wonderful city was painful and came too quickly. If you have the opportunity, opt for a whole year and not just one semester.

Unfortunately, my visa expired on July 31st. from and on 7/30 I took my flight to Kuala Lumpur to explore Southeast Asia for another 2 months – it’s worth it!

All the best and have fun to all coming Melbournians (even if only for a while)!

Since my German university did not have a cooperation university in Melbourne, but I really wanted to do my semester abroad there, […] 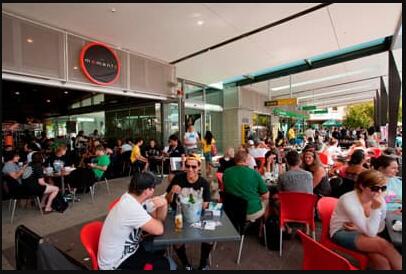 According to areacodesexplorer, Australia, Oceania, to the surface the world’s sixth largest country, has several different habitat types within the country’s borders; […]